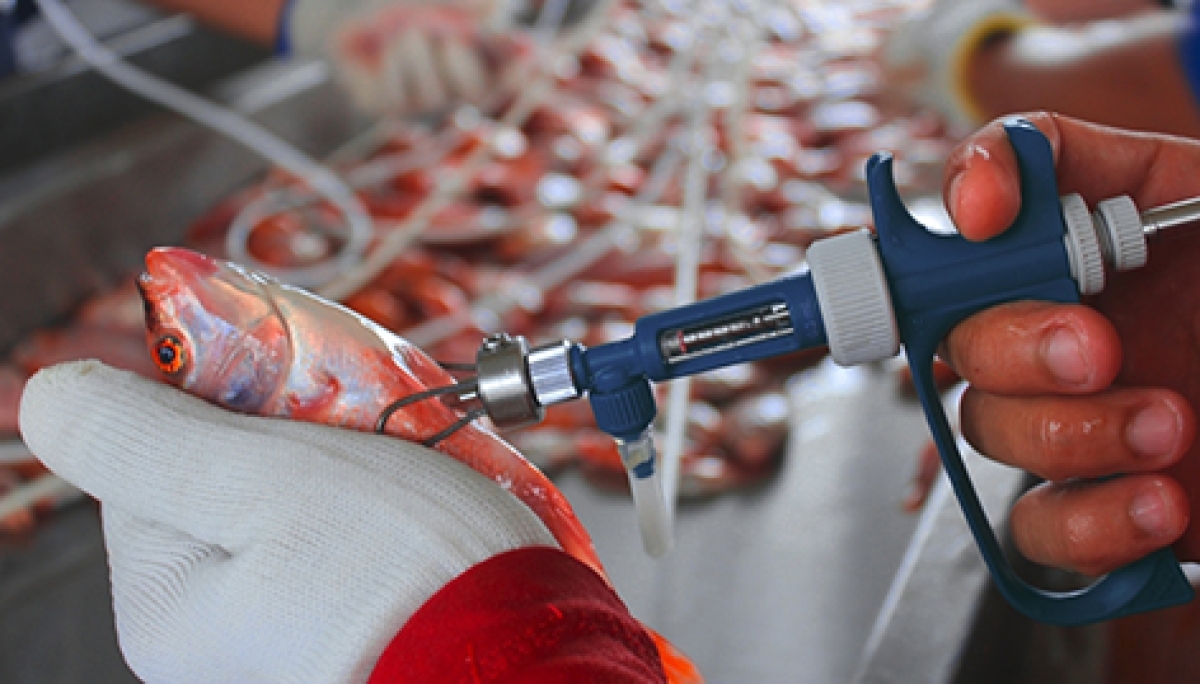 Over the past two decades, aquaculture has grown at an average annual rate of approximately 8%. In 2014, the contribution of aquaculture to supply food for human consumption overtook wild-caught fish for the first time. This unprecedented growth of global aquaculture has not been free of challenges.

From antibiotics to preventive medicine in aquaculture

The vaccine against enteric redmouth disease (caused by Yersinia ruckeri, a gram-negative bacteria) developed in the 1970s was the first to become commercially available. During the past 20 years, fish vaccines have become an established and cost-effective method of controlling several viral and bacterial infectious diseases. The overall positive effect of vaccination in farmed fish is reduced mortality, making production more predictable and profitable.

"Vaccinating a tilapia with the 1810 ultra syringe"- © by courtesy of Vetiplus, Colombia

In Norway, the use of antibiotics has been reduced from 47 tons to approx. 1 ton after vaccination became a common strategy to control bacterial diseases in farmed fish. Viral diseases are more difficult to control (also due to the lack of anti-viral drugs) and have caused catastrophic losses to fish farmers around the globe. Nevertheless, several viral vaccines have been developed in finfish. The Chilean Infectious Salmon Anaemia (ISA) crisis of the first decade of the 21st century was caused by inadequate production management methods, including the failure to vaccinate fish against ISA.

The challenge of reducing side effects when injecting

Vaccination for aquatic species has three major routes of delivery: injection [intraperitoneal (IP) and intramuscular (IM)], immersion, and oral. Among those methods, vaccination by injection has proven preferable where species allow, having several definite advantages. It provides the most direct delivery of antigen throughout the immune system. The vaccine can be concentrated and delivered in the presence of adjuvants and other beneficial compounds (e.g., carriers, bacterial antigens/cells, etc.) that could not be delivered by other methods. However, despite its high efficiency in generating immunity, injection also has some disadvantages. Inflammation and pigmentation in the abdominal cavity, a prolonged period before fish return to normal feeding and, potentially, downgrading of the fish fillets are possible side effects associated with injectable vaccines.

Local reactions may vary from mild, such as very slight adhesions (most frequently around the injection site), or hardly noticeable amounts of melanin on viscera, to severe, including major lesions to the carcass after evisceration. Those affect almost every internal organ in the cranio-dorsal area, often with a considerable amount of melanin, where viscera become unremovable without damaging the integrity of the fillet.

With advancements in immunology, molecular biology and microbiology, vaccine technology has been under continuous development. Minimizing reactions is a main goal. Many factors contribute to the onset of side effects, dose volume being one of the most important.

Vaccination history over the last 35 years

In the late ‘80s, fish were injected with relatively high vaccine doses such as 0.2 millilitres, which in some cases is still prevailing, and sometimes resulting in serious adverse reactions in the abdominal cavity.

A vaccine with half that volume was launched on the Norwegian market in the mid ‘90s, bringing the advantage of reducing side-effects, without downgrading efficacy. In 2003 a 0.1 mL-dose, multivalent vaccine, protecting fish against various pathogens was introduced. Five years later the very first 0.05 mL vaccine, containing the same antigens was released. Yet, the reduction in the size of vaccine doses, of utmost importance, went nearly unnoticed by the ichthyology community. Present scientists are not the first to be aware that dosis sola facit venenum1.

Thanks to the increase in vaccine potency, developers have been able to reduce the required doses, starting the successful story of efficacious micro-doses, including multivalent ones.

The adoption of the novelty was not fast in the beginning. Scepticism and concern slowed down the process. Veterinary professionals and fish farmers had doubts about the long-term protection, while pharma companies were concerned about the quality of the existing syringes for micro injections and the reproducibility of results.

One of the key companies that has helped introduce the administration of micro-dose vaccines is the Swiss firm Socorex, true pioneers in this field. While the company initially focused on glass and metal syringes for human applications, it branched out into developing automatic syringes for the animal health sector in the 1980s. Terrestrial livestock have been their first focus, galvanised by industry desire for smaller and more precise doses, Socorex has moved into the fish farming sector later on. Their dedication to accuracy and quality has been an all-time tradition, precision liquid dosing having been their strength for nearly 60 years. Having successfully designed a syringe for delivering vaccines to day-old chicks, which are typically around 40 grams, Socorex realised they could transfer the technology to aquaculture, fish being generally vaccinated between 15 and 80 grams of weight.

Socorex could benefit from their decade-long experience in the lab and biotech fields to develop the new 1810 ultra model – a true metrological system – allowing operators to deliver doses as low as 0.02 mL, if needed, without compromising reliability and efficiency. 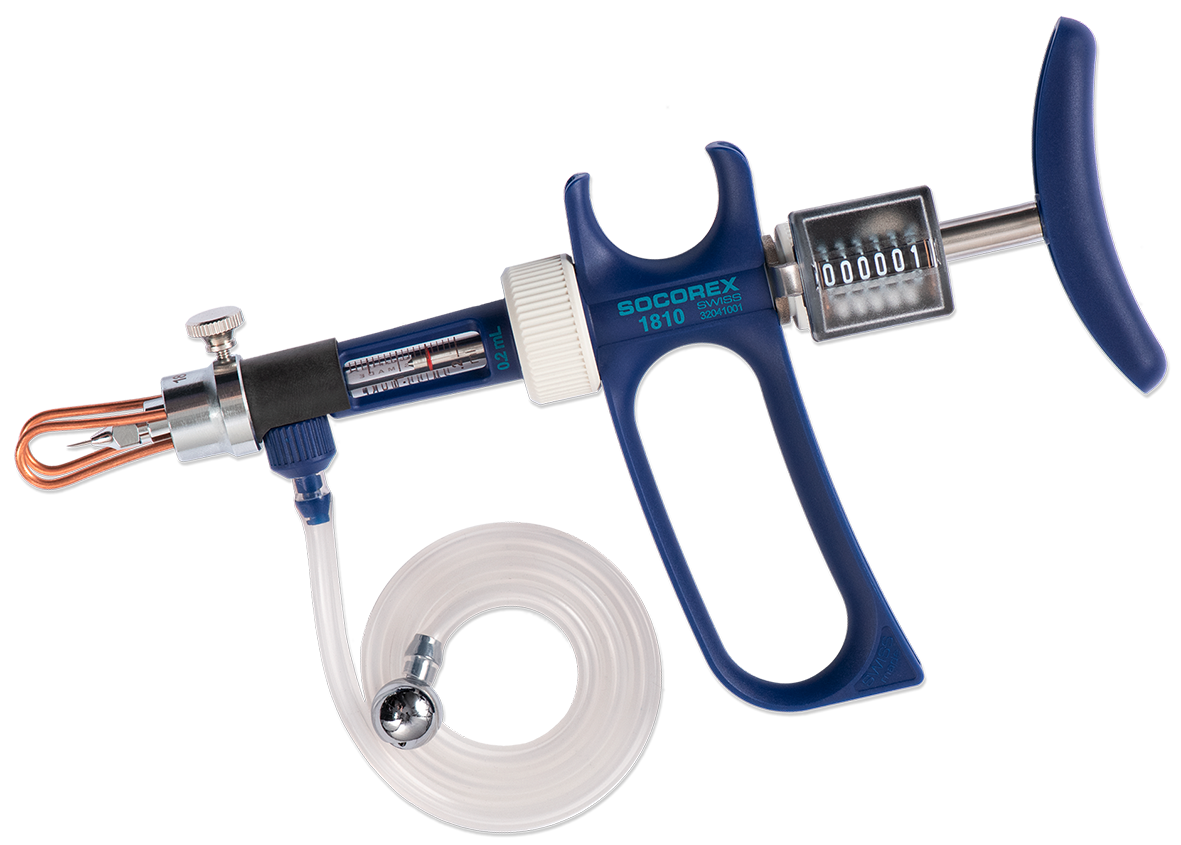 The medical-grade precision this model brings to the aquaculture sector – the syringes have a 99 to 99.5 percent precision rate, an exceptional performance and great advantage. Excessive doses could lead to serious adverse reactions and highly increase the cost of vaccination, whereas lesser doses will reduce the vaccine efficacy.

The new Socorex ultra model features a very fast activation pace, making it perfect for injecting a great many fish. Made from high-resistance moulded resins, with a thick glass barrel, it is extremely light and requires smoother pressure. Long lasting, it is extremely resistant to shocks and to water, even saltwater. The instruments can last indefinitely, if properly maintained and if seals and springs are replaced when needed, just like medical instruments.

The 0.1, 0.2, 0.3 and 0.5 mL nominal sizes stretch volume selection from 0.02 mL to 0.5 mL. They are therefore suitable for a wide range of species, including salmonids, tilapia, pangasius, seabass and sea bream. They also operate with both oil- and water-based vaccines. A range of accessories to help optimise performance are available. These include the FishGuide, a double copper loop that facilitates the accurate injection, while protecting operator's hand from accidental self-injection, and the Abacus counter, allowing the exact count of how many doses have been delivered.

Aquaculture will continue to face uphill struggles as its expansion persists, and fish farmers will always appreciate the contribution of leading manufacturers fully committed to supporting its growth, in full respect of the environment.

1 “Only the dose makes the poison”, aphorism intended to indicate a basic principle of toxicology. It is credited to the Swiss alchemist Paracelsus (16th century).

Search in this blog